PayPal customer service (@AskPayPal) and I had a conversation this morning via direct messages on Twitter. I appreciate their prompt response.

They looked into the issue where the Taiwanese address I gave them was passed on to the seller with “Province of China” appended. They will forward it on to the software engineers behind the scenes. It’s not a high priority, but will get looked at in time. They can’t tell me when it will be fixed, but encourage me to continue sending packages to Taiwan through PayPal and to let them know if it happens again. (see below for a transcript)

As far as I can remember, this is only the second time I’ve used PayPal as the middleman between me and a seller who was shipping to Taiwan. Given how little I shop, it’s unlikely that I will send anything to Taiwan in the near future.

Here’s where you come in: Next time you order something bound for Taiwan and pay using PayPal, check carefully to see if the address on the package when you receive it is the same as what you gave them. Particularly if “Province of China” has been added. If it has, let them know. If this is pervasive, it is NOT a low priority issue.

End quote from merchant, back to my words. (Character limitations on Twitter direct messages make this a less than ideal medium, but it’s much, much better than silence) 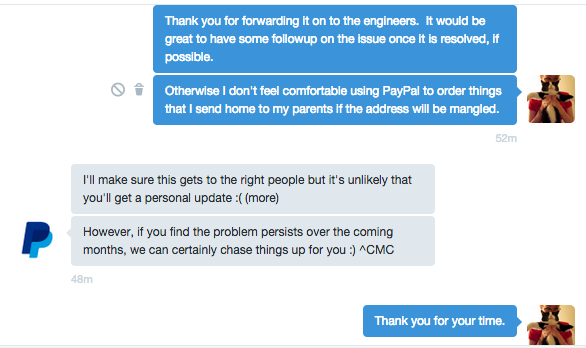