Don’t get me wrong, I still love my topic. Perhaps the biggest issue holding me back when it comes to finishing writing about it is that I love it too much to let go of, however briefly that may be before I have to start revising the dissertation into a book. Ending chapters feels like leaving half the puzzle still in the box and calling the disjointed creation pieced together out of the rest “complete.”

Taking the wisdom of many advisors who know a lot more about this process than I do, I’ve been trying to come to terms with not trying to connect every last piece with each other before moving on.

In the middle of writing up the last section* of my longest chapter, a thought occurred to me that might be freeing, and I wrote the following paragraph, which will probably end up, in revised form, in my yet-to-be-finished introduction.

“Ideally, this dissertation will end up sparking more questions than it answers. The texts I examine in the following three chapters are relatively unstudied, and in some cases the burden of analysis has rested solely on me to provide an accounting for their strange and wonderful blend of entertaining fiction and moral instruction. If it seems as if certain questions have been overlooked, or were played with for a brief moment before being discarded for a different toy, I agree that this entirely likely to be the case. These texts are so rich that many books threaten to emerge from each chapter. I won’t be the one to write them all. Perhaps you will?”

This immediately made me think of two things:
First, a much beloved book (now mostly scientifically inaccurate, but still beloved) from my childhood called The Day of the Dinosaur by Stan & Jan Berenstain which ends with: 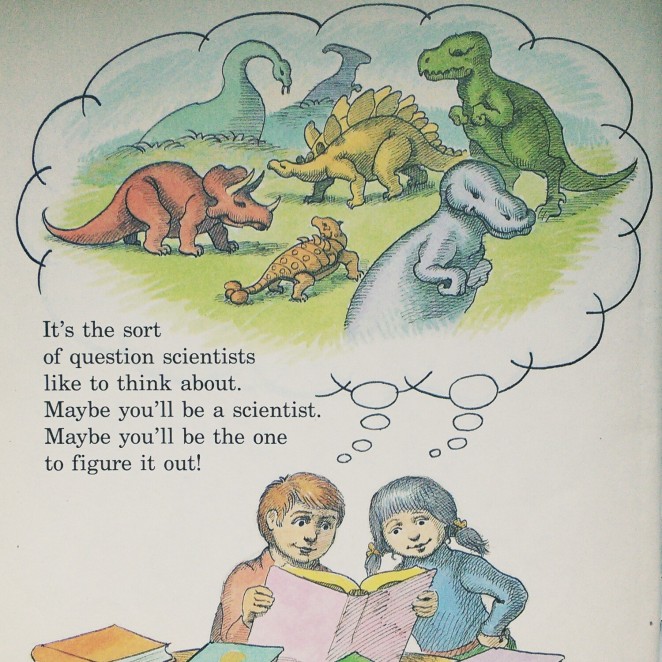 and more directly related to my dissertation, two sections from the book that started it all for me, really: Precious Volumes: An Introduction to Chinese Sectarian Scriptures from the Sixteenth and Seventeenth Centuries by Daniel Overmyer, published in 1999.

The focus of this book is on sectarian “precious volumes” because in general they appeared earlier and are related to a specific form of religious organization, within which they were considered to be divinely revealed. There are more than enough of this type of text to form the basis of a book; narrative pao-chüan deserve their own study.

and second, in the tail end of the conclusion, on page 282: 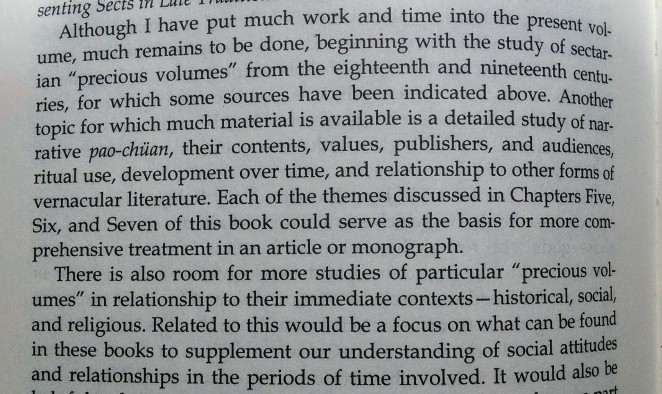 Although I have put much work and time into the present volume, much remains to be done, beginning with a study of sectarian “precious volumes” from the eighteenth and nineteenth centuries, for which some sources have been indicated above. Another topic for which much material is available is a detailed study of narrative pao-chüan, their contents, values, publishers, and audiences, ritual use, development over time, and relationship to other forms of literature.

When I first read this book, back in 2010, both of these paragraphs had me thinking, “hmm, maybe I can do a little of what he’s suggesting,” and here I am, five years later, finishing up a dissertation on 19th century, mostly-narrative baojuan.

_______________
* You have no idea how much it pains me to call it that since I still see so many loose ends, but really I need to know how many my committee members see and are comfortable with, rather than trying to give them a perfectly woven tapestry on the first try.
** I’m pretty sure the entirety of the book exists in my subconscious somewhere and is probably coming out in other parts of my dissertation as well. The more I write, the more I leave dumb jokes to myself that will need to be revised out later. Off the top of my head, I can think of a nods to Indiana Jones & The Last Crusade and The Princess Bride that I’ll hopefully remember to eliminate.

2 thoughts on “Dinosaurs and Dissertation Writing”