I’ve been thinking about this photo lately, of G.L. Mackay and his family, which I found in The Black Bearded Barbarian by Marian Keith, published in 1912. I wouldn’t recommend reading it, mostly because it’s written at a children’s level with a few too many exclamation points, and also because, as Keith notes in the introduction: “The life of Dr. Mackay in From Far Formosa*, compiled by Dr. J. A. MacDonald, editor of the Toronto Globe, has been my chief source of information. Indeed, this story has been taken almost entirely from its pages, and owes Dr. MacDonald much thanks.” (x) But it does reproduce some great photos.

In 1878, seven years after arriving in Taiwan, George Leslie Mackay married a Taiwanese woman named Tiuⁿ Chhang-miâ, (張聰明). She was 18, he was 34. Her name had been Chhang-a (Onion, 蔥仔) until she was baptized by Mackay and renamed Chhang-miâ, which means “intelligent and bright.” In Canada, where Mackay was from, she was called Minnie.

Tiuⁿ and Mackay had three children – two girls, Mary Ellen (偕媽蓮) and Bella Catherine (偕以利), who married Taiwanese men, and a boy, George William (偕叡廉), who married a Canadian woman, Jean Ross, and returned with her to Taiwan. 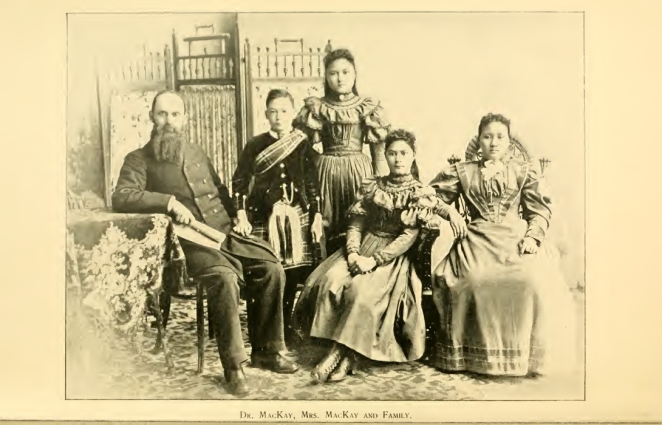 And here’s George again, all grown up and with Jean Ross.

This is part of Taiwan’s heritage and part of my heritage.