Having read about the Princess of Eight Treasures online years ago, when we were in Kenting for a night at a resort in late December 2015 (thanks parents!), I made sure to go see the temple in person. Granted, my pictures shared here are little different from what you can find yourself via online image searches, but being there helped me begin sorting out my thoughts.

Initially, my curiosity had been piqued by our stories’ shared heritage,* our souls tied to Taiwan’s land through complex networks of global traffic and cultural exchange. Compelled to visit out of a (possibly overdeveloped) spirit of inquiry and, admittedly, a great degree of personal amusement, I left with different impressions spinning through my head, developing into a new sense of the Princess of Eight Treasures in larger context. 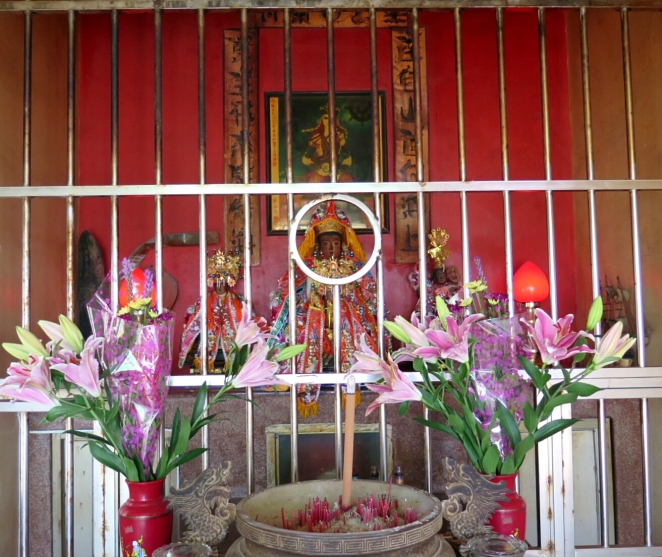 As the picture in my last entry showed, on The Princess of Eight Treasures’ altar, there sit a new pair of klompen. There is also a very dusty model of a tall ship leaning against the right wall, four goddess statues, dusty bottles of some drink, and a piece of what looks like wood from an actual shipwreck, carved with words and the image of a ship, bearing a rusty bolt.** Below the altar, something I didn’t notice until reviewing my photos, is what looks like a bone pot probably containing the remains discovered decades ago that prompted the original shrine’s construction. 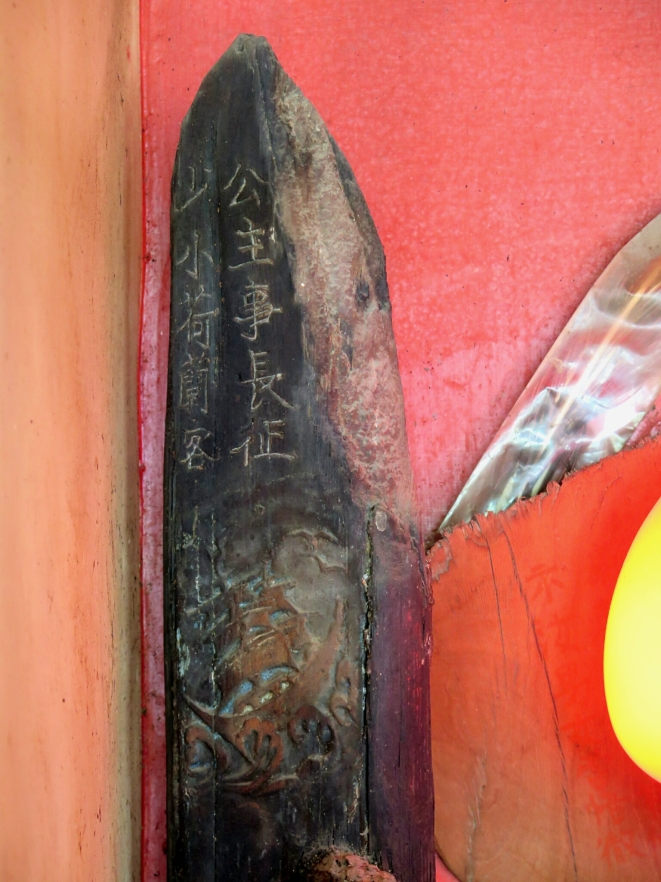 Whose stories are being told here? How many different ways can we hear them?

The easiest thing to do with this shrine to the Princess might be to express amusement. A foreigner receiving incense and offerings from generations of Taiwanese villagers in a seaside resort town? How curious!

It’s also easy to express bemusement at the lack of a precise date (let alone century) for her shipwreck. And at the vague processes of apotheosis. Found-bones perceived as foreign and therefore worthy of particular veneration in the early 20th century. Temple reconstruction in the 1980s and 1990s. A large scale Buddhist ritual for feeding of hungry souls in 2008 after a local elderly woman reported how the Princess harassed her while she was hunting for mushrooms in the hills above the village.  These tell different versions of the Princess’s identity and the claim that she is deserving of worship.

The open, changeable text consisting of the Princess’ histories and shrine is the antithesis of dateable, fixable facts that are easier to examine, categorize, and interpret. Her story, full of holes, instead invites us to fill them in with our own needs and concerns.

My casual amusement has long since faded, as well it should.

It seems to me that, in the shrine to the Princess of Eight Treasures, successive layers of Taiwan’s colonial past are captured in stark terms. This is a uniquely Taiwanese story, from the strong gravitational pull on oral histories that the brief Dutch period exercises, to the traditionally Chinese means of incorporating the potentially dangerous soul of an unmarried woman into the register of offerings to benevolent deities.

One source I read describes the Lords of Ten Thousand Responses, which you’ll remember as focus of the central altar in this temple, as also being intimately connected to Taiwan’s colonial past. Preceding centuries hold countless single male fishermen, sailors, traders, laborers, and farmers who lived and died far from home and without descent.  Even once the frontier settled enough for long term colonization, newly established families died in skirmishes with aborigines and intra-ethnic conflicts. All of these ghosts are honored across the Taiwanese landscape by these shrines.

Taiwan’s past is filled with the souls of those who died in violence or isolation.

Keeping this in mind, now allow me tell another version of the Princess of Eight Treasure’s story, another blend of historical fact and fiction:

A high profile woman from one of the first colonial powers to take Taiwan (and one of the first to then lose it), storm tossed and vulnerable, is murdered by the area’s aborigines. In 1872, the Paiwan clash with the Japanese, who have sent soldiers to extract retribution for the Ryukuan sailors killed in 1871, (a move also linked to the 1874 move by Japan to colonize and absorb Okinawa, an empire building move that presaged further expansion).   In 1875, after years of conflict with the Paiwan tribes onto whose ancestral lands Fujianese and Hakka settlers were encroaching, the Qing fortifies its southernmost colonial outpost of Hengchun (恆春) with thick defensive walls and gates.  Some time later, Taiwanese residents of the area, descendants of those 17th-19th century Chinese colonists now colonial subjects of Japan, finally give this vulnerable child of the former Western colonizers her due of incense and sacrifice. Now all the ghosts are cared for.

Or are they? Who has been forgotten?

This tale of successive colonial forces perpetuates the erasure of aboriginal claims to the lands and seas, casting Taiwan’s original inhabitants as savage forces of uncontrollable backwardness, unable to recognize the royalty landing on their shores. Merely out for blood and treasure. Instigators of particular moments of violence rather than subjects reacting to systemic violence. Rather than the powerful forces of disruption that Dutch and Chinese were to aboriginal ways of life from the 17th century onwards, here, the colonizers are weak and far from home, embodied in the “少小荷蘭客,”  young Hollander guest.  It captures anxieties of shifting entitlements to the same land, the vulnerability of each colonial power to the next one to come along, while justifying the displacement of the land’s original peoples.

Death, bones, and lonely souls are bound up together in this tale.

The Princess of Eight Treasures is a historical marker of conflicts between aborigines, Dutch, Chinese, Japanese, and Taiwanese over the very sands her image looks out upon, whatever blood shed on them washed away over and over again by those small waves.

But this is 21st century Taiwan. Mixed blood flows through living veins, rather than enemy blood spilling out on the ground.

Visiting her temple today, we stand before the altar of a 17th century Dutch goddess watching over a modern day seaside village of mixed ethnicities – Paiwan, Hoklo, Hakka, southeast Asian, Chinese, and various colors of European and American.

We bear the responsibility to tell new stories of the present.

Yet we also must remember the old ones, lest we forget the departed souls whose land we share and the forces that shaped their lives and deaths.

———————–
* Not that my genetic background means much to me as a TCK with ambivalent feelings about the color of my skin and hair (somewhere, I’ve got a childhood drawing of myself with black hair because in my 4-year-old mind, that’s the kind of hair all people should have), but I’m 75% Dutch by ancestry.  For me, this is endlessly funny in Tainan with those statues of the Dutch bowing to Koxinga, and was again entertaining when I first heard about the Princess.   Pretty sure my ancestors weren’t the seafaring adventurous colonial types, but who knows? Maybe someone in that vast sea of genetic material made it to Taiwan before my parents did? No princesses, tho.
** It’s worth noting that large fragments of a 19th century wooden ship were actually found buried under the sands of this beach in recent years.

6 thoughts on “Foreign bones on Taiwan soil: the Princess of Eight Treasures (part 2)”